Signalling the beginning of a profound collaboration between our nation and the Republic of Ecuador, on the morning of 1 December 2016 our Foreign Minister, the Honourable Francine Baron, and Ecuador’s Ambassador to Dominica, His Excellency Dr Galo Yepez Holguin, signed a mutual agreement to waive travel visas for all our citizens.

The visa waiver agreement applies to holders of all passports, and supersedes a previous agreement allowing holders of diplomatic and official passports to travel within the borders of Dominica and Ecuador visa-free.

At the signing ceremony, Minister Francine Baron noted that people-to-people contact was key to successful relations between Dominica and Ecuador. The Minister reiterated the success of the student exchange, between the Dominican and Ecuadorian pupils currently studying at the Dominica State College. Agricultural cooperation was also highlighted by the Minister, who underlined the importance of expanding cocoa and coffee production, as well as learning from Ecuador with respect to the cut-flower industry. Other areas of engagement included the further development of prawn farming.

Ambassador Holguin said he was delighted to be in Dominica, and “very happy” about the student programme sponsored by our nation. He emphasised increased cooperation between South America and the Caribbean, and increased discourse between Dominica and Ecuador. 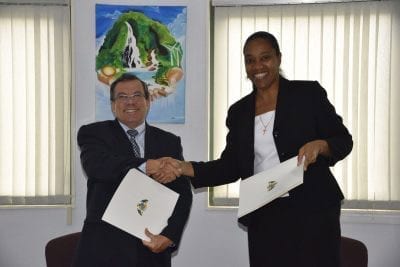